I've been brainstorming ideas for my campaign for Alexander the Great, and as rules continue to ferment away I've decided to take a pile of old models from various shoe-boxes around the house, loft & garage, and have a bit of a stock-take over a bottle of cheap beer: rather a good use of an evening, all things considered!

First up, I discovered my ancient collection (probably from the 1990s) for DBA Macedonians and Persians, which I've also combined with a heap of further figures I got on a kickstarter several years ago and then never managed to do anything grander with; and lastly I have other DBA armies for Pyrrhus, which contain several elements that can be co-opted to serve as decent Macedonian troops.  Altogether, I believe the models are a mix of Irregular Miniatures, West Wind Miniatures, and Essex Minis.  Quality is wildly variable, but frankly the aim is progress, not perfection!

So, what do we have? 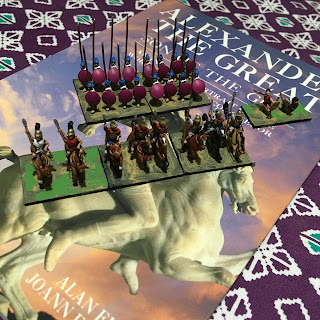 Well, a good starting point is the Pyrrhic army I got about 2 years ago for DBA.  This gives me a good core of painted Macedonian/Greek units.  Specifically, I get 1 Kn (Companions), 1 Cv (Thessalians) and 1 LH to straight away give me all the cavalry I need.  I also have 4 Pk elements and even a 1 Ps. 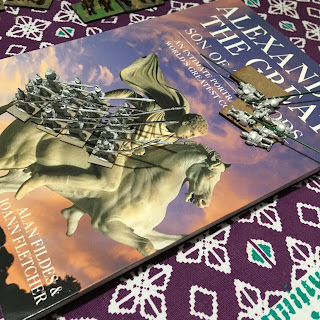 Next I have some spare Pk - specifically, 4 Pk bases from Irregular, of Pikemen at the attack with spears at 45degrees.  Additional good news on the pointy-sticks-are-good front, I have enough spare unpainted figures for 2 Pk extra should they be wanted.  These models are however not even base-coated,and I remember they didn't come with pikes - I had to hand-drill out holes to put plastic fibres inplace for the pikes, which is some thing I've never had to do before, and strikes me as very much something life's too short for.  Still, here I only have 8 models to fuss over. 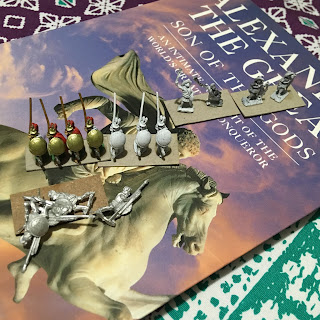 Also here are models for the 4Ax (Hypaspists), represented by no less than two elements I have of models - plus even some spare based as the lighter 3Ax element for when they fight more flexibly.  There's no Pk option for them, but I can easily use one base of Pk for them since I have no need for so many at the moment.  In addition to the above, I have 2 Ps bases, featuring slinger peasants with floppy wide-brimmed hats (bloody casuals...) 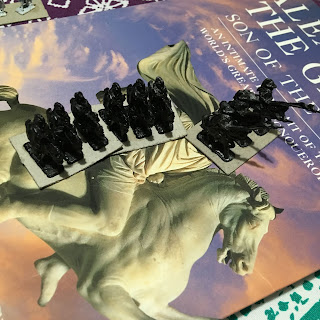 Lastly I have additional cavalry from the old Irregular models.  The figures are a bit squashed-looking and difficult to see detail on, but I believe I have a new element of Kn (Companions) to use, plus two elements of Cv (judging by the horse-hair plumes, beards and such, I guess they are Thracians?) 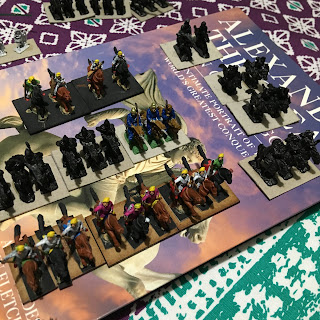 For the Persians, I have the following units of cavalry: I believe I have six Cv bases of generic Persian, Median and Bactrian cavalry.  I also have an element of very heavy cavalry, featuring scaled armour over the riders' legs and their horses - presumably these are Kn (Persian, Bactrian or Saka Heavy Cavalry).  I also have 5 LH elements, featuring a mix of javelin-armed Persians and more exotic bow-armed steppe-horsemen. 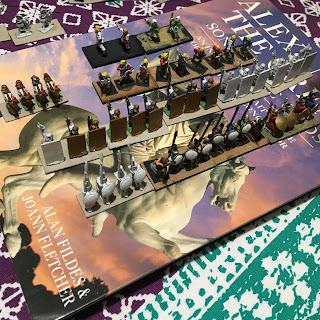 Lastly for the Persian army's foot-sloggers, we have five 3Ax elements with huge rectangular shields - a quick Google search tells me these are likely Kardakes, so rebasing them as three 4Ax bases seems very likely.  I also have three 3Ax bases of Persians with the crescent-shaped shields, so these will fit nicely as Takabara infantry.  Best of all, I have 4 elements of Sp, representing Hoplites who can serve as the Greek Mercenaries.  I have also got a single 4Bw element to represent archers, even though they aren't available in the latest DBA army list.  Rounding this all out, I have two Ps elements of Persian slingers.

Topics in the Blog